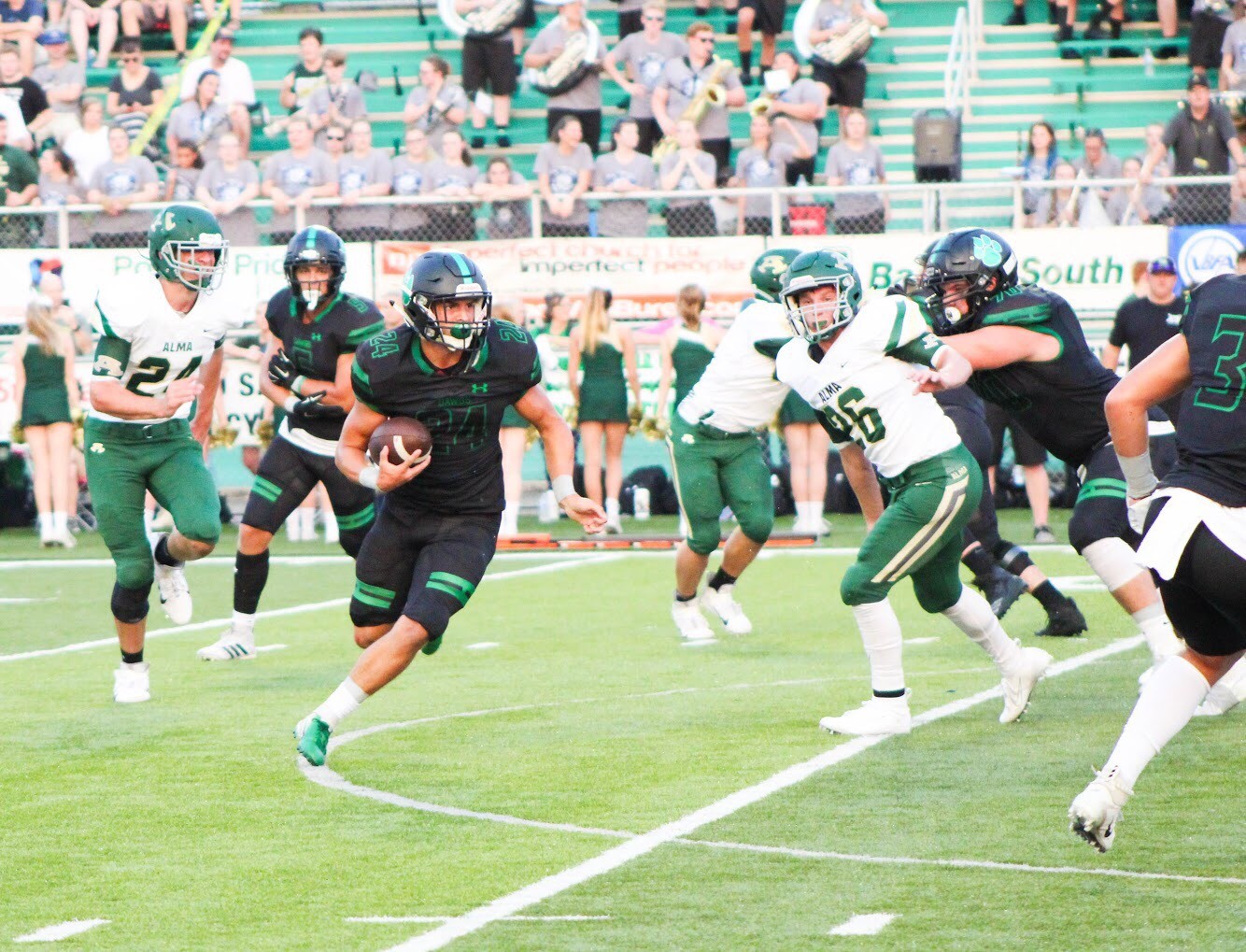 Crosby Tuck will never forget his first game in the Battle of the Bone rivalry as head coach of the Van Buren Pointers.

“This means a lot to me,” he said moments after his Pointers defeated the Alma Airedales, 53-21, at Citizens Bank Stadium at Blakemore Field. “One thing I’ve learned in the year and five months I’ve been here is that the Battle of the Bone means a whole lot.”

Tuck, who was the Pointers’ offensive coordinator last year, his first at Van Buren, was named head coach in the spring when Casey Dick left to take over as head coach at Fayetteville. Tuck helped Van Buren to a 48-33 win over the Airedales that year, snapping Alma’s seven-game winning streak in the heated Crawford County rivalry.

Now, with Tuck at the helm, the Pointers have started a winning streak of their own and lead the series by a 38-30-5 margin.

“There are rivalries all over the state and there may be a few that are like this, but there aren’t many rivalries I’ve ever seen that are like this one,” Tuck said. “I’ve heard about this one all my life, but actually being involved with it is a different deal. It’s a huge game. It’s huge for our community and I’m just happy the whole community gets to celebrate this one.”

The community had a lot to celebrate early in Friday night’s game as the hometown Pointers scored on four straight drives to open the game, building a 25-0 lead with just over three minutes left in the first quarter.

Van Buren quarterback Gary Phillips notched the first score of the game on a three-yard run and Chris Flores kicked the point after for a 7-0 lead.

The Pointer defense then forced a punt and the offense made it 10-0 on a 30-yard field goal by Flores at the 6:11 mark of the quarter.

Alma fumbled the ensuing kickoff with Devin Swearingen coming up with the loose ball. Van Buren found the end zone two plays later when Brayden Rivas scored on a one-yard run ahead of a two-point conversion pass from Jaiden Henry to Guillermo Palafox off a bobbled snap, pushing the home team to an 18-0 lead.

Alma’s next possession ended in another punt and the Pointers went to work again, sniffing out the end zone on a 59-yard scramble by Phillips. The extra point by Flores lifted Van Buren to a 25-0 advantage.

The Airedales cracked the goose egg in the second quarter when Grayson Bailey caught a 10-yard scoring pass from Landon Blair, who then ran it in for the two-point conversion and a 25-8 score.

The Pointers answered with a 30-yard touchdown pass from Phillips to Bartholomew and a run of three yards by Rivas for another score.

Van Buren went ahead, 46-15, on a 40-yard pass from Phillips to Maury Newton and then added another score on its next possession when Phillips crossed the goal line from a yard out for a 53-15 cushion with 4:26 left in the third quarter.

“This feels great,” Tuck said after the win. “I feel like these seniors really deserved this, but just deserving something doesn’t mean you’ll get it, so they had to put the work in to make themselves deserve it, then they had to come out here to make sure they would execute and take care of their business on the field. They were able to do that.”

Phillips finished with 332 passing yards and another 122 on the ground. Bartholomew was the leading receiver for the Pointers with 162 yards on six catches.

“I’m proud of this senior class that they get this memory as seniors and proud of this whole football team in general,” said Tuck. “There’s so much emotion in a game like this. There’s so much to the week with all the different spirit days, the pep rally and all the extra stuff and I thought our guys did a great job handling all that.”

He added, “I’m just so proud of them putting this whole week together and coming out with a win tonight.”

Van Buren is now 2-0 for the first time in five years and plays at Fort Smith Northside Friday night.

“We’ll celebrate (this win) tonight and then move on to fixing mistakes on Sunday and getting ready for Northside,” Tuck said, then, with a grin, added, “but I guarantee you our community will celebrate this one for the whole year.”